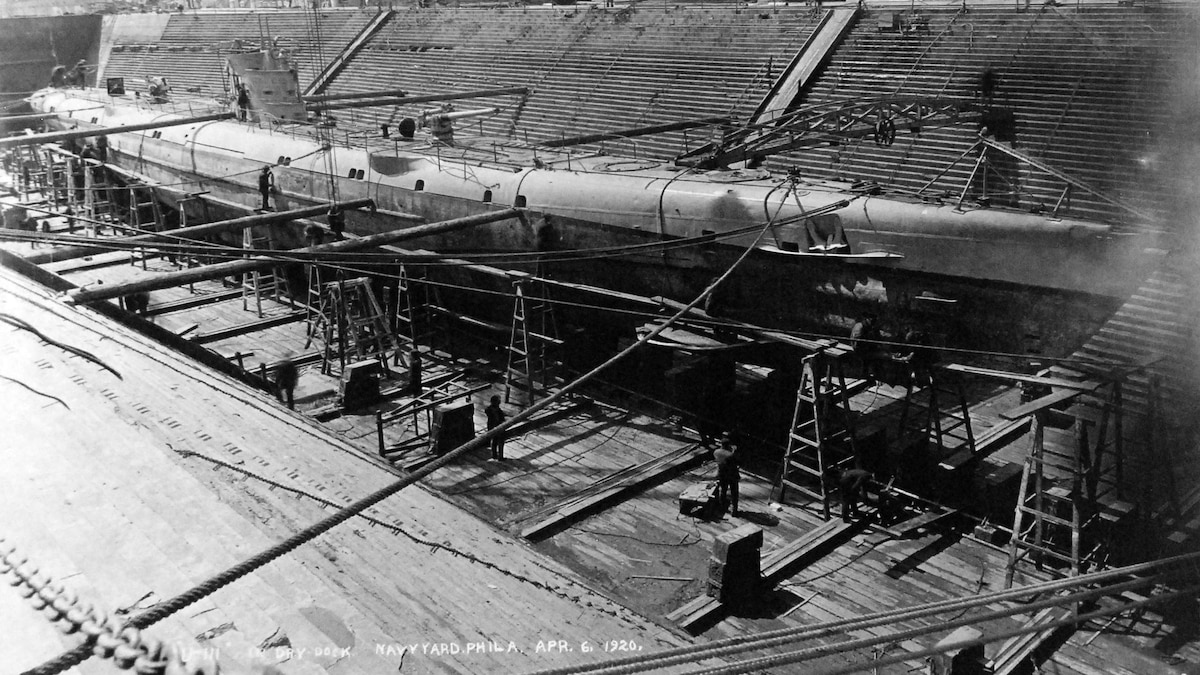 This past Labor Day, as beachgoers up and down the eastern seaboard of the U.S. enjoyed a sunny holiday at the shore, Erik Petkovic was in the darkened cabin of R/V Explorer some 40 miles off the Virginia coast. Peering into a video monitor linked to a remotely operated vehicle (ROV) some 400 feet below, he suddenly exclaimed, “That’s it! There it is!”

The object that caused his excitement was the wreckage of SM U-111, the last World War I-era German submarine to be discovered in U.S. waters. The sleek tube of riveted iron had been part of the Unterseeboot (U-boat) fleet that struck terror in Allied sailors.

After the war an American crew brought the captured submarine across the Atlantic in a daring solo voyage that required navigating the icy waters where R.M.S. Titanic had sunk seven years earlier. “It’s one of those remarkable lost tales of survival,” Petkovic said.

There are more than a dozen German U-boat wrecks from both World Wars in U.S. waters, and the submarines hold a special fascination for shipwreck divers like Petkovic. He’s one of a small number of so-called “technical divers” who explore depths wildly exceeding the standard 120-foot limit observed by recreational divers.

Navy records indicated that U-111 sank off Virginia on August 31, 1922, in 1,600 feet of water—far beyond the limit of any human diver. But years of research led Petkovic to a different conclusion—and a historic discovery for the team of R/V Explorer.

Commissioned by the German Imperial Navy in 1917, the 235-foot U-111 patrolled the waters of the North Atlantic, sinking three Allied merchant ships before the Kaiser’s surrender in November 1918.

After Armistice, all seaworthy U-boats were sent to the British North Sea port of Harwich, where most were cut up for scrap. A handful were saved for Allied forces to dissect and discover, by reverse engineering, the prized technology behind German diesel engines, periscopes, and gyroscopes.

President Woodrow Wilson directed the Navy to send six surrendered U-boats to the U.S., where the subs would tour the East Coast and raise money for Victory Bonds. Then the vessels would be taken apart, studied, reassembled, and eventually towed out to sea and sunk. The subs were to travel in a convoy escorted by a submarine tender, sailing from Harwich via the Azores and arriving in New York no later than April 23, 1919.

Lt. Commander Freeland Daubin was given charge of U-164, but he discovered that the submarine had been sabotaged by both German and Allied operatives eager to keep technological prizes out of each other’s hands. After a friendly conversation fueled by scotch, Daubin persuaded British authorities to swap the sabotaged sub for U-111.

The last-minute exchange put Daubin and his 32-person crew behind schedule. U-111 was still undergoing repairs when the convoy set sail for the Azores on April 3, 1919. When the U-boat finally launched four days later, the commander made a fateful decision: Rather than chase the convoy, he would attempt a solo voyage along the shortest—and deadliest—course across the Atlantic: the Northern Route, the iceberg-strewn passage that claimed R.M.S. Titanic seven years before.

The gamble faced long odds. More than half the crew had never set foot on a submarine before, much less operated an enemy sub with signage in a foreign language. U.S. sailors at the time relied on magnetic compasses to navigate, while the German U-boat was outfitted with a more sophisticated—and unfamiliar—gyrocompass. And U-111 had a salvaged, low-power radio with limited reach.

Four days into the Atlantic, a soluble plug secretly installed by German saboteurs gave out, nearly sinking the submarine in the middle of the night. A heroic effort by the chief gunner’s mate saved the vessel and crew.

Icebergs were a constant threat. Storms and fog obscured the stars the American crew relied on to dead-reckon their location. Food supplied by the British—allegedly enough for three weeks—was depleted after just one, leaving only potatoes, jam, and pickles for the rest of the frigid voyage on the unheated vessel.

After a week at sea, navigators determined that U-111 was roughly 1,000 miles from New York. The submarine was running low on fuel, and the crew hatched a plan to hoist a makeshift sail if the engine failed.

Remarkably, U-111 entered New York harbor under its own power on April 19—just 12 days after departing England and two days before the U-boat fleet arrived in the U.S. Newsreel footage shows the jubilant crew celebrating atop the sub.

U-111 made its Victory Bond voyage, attracting curious crowds wherever it went. Local newspapers recorded the events: “The visits of the captured Hun pirates, harmless and toylike now, will do much to call to the attention of the people the daring of our men who fought these underseas dastards,” crowed the Bridgeport, Connecticut, Times and Evening Farmer following a visit by the sub in May 1919.

Erik Petkovic was a teenager in Cleveland when he began diving, inspired by Robert Ballard’s discovery of Titanic in 1985. He started exploring shipwrecks in the Great Lakes, eventually becoming an accomplished technical diver and authoring books on shipwreck exploration. He joined the Secret Service and worked in the White House during the Obama administration, all the while continuing to dive. Detective work and searching for shipwrecks, he says, “require the same basic investigative skills.”

Over the years, Petkovic kept a file on U-boat wrecks in U.S. waters. Thirteen German submarines—five from World War I and eight from World War II—were believed to be within reach of technical divers. But U-111 was assumed to be too deep and lost to history.

Petkovic started researching possible locations for U-111 several years ago. Drawing on earlier research by Gary Gentile, a pioneer of technical diving, and digging through naval archives in Germany and the U.S., Petkovic traced the path of U-111 from the UK to the U.S., then to sea trials around Cuba, and finally to its disassembly and reassembly by Navy engineers.

Plans called for the U-boat to be sunk off the North Carolina coast in 1921 as part of the so-called “Billy Mitchell fleet.” (Mitchell, an Air Force brigadier general, wanted to demonstrate the superiority of the fledgling Air Force over the Navy by destroying a fleet of ships from the sky.) But as U-111 was being towed from Maine to Cape Hatteras, the sub foundered and sank off Virginia Beach.

The sub was eventually raised and towed to Norfolk, where it sank and was raised a second time. On August 31, 1922, the storied U-boat was hauled out into the Atlantic, its hatches opened, and explosive charges detonated.

Navy records indicated that U-111 went down in 1,600 feet of water. But information Petkovic was collecting suggested a different location—a spot slightly landward of where the coastal shelf plunges hundreds of feet.

In the summer of 2021, he called his dive buddy Rusty Cassway, who captains a dive vessel out of Cape May, New Jersey, and read off a set of coordinates. Cassway consulted a database of “hang logs,” locations where fishermen have reported snagging their nets. While hang logs identify underwater obstructions for fishing vessels to avoid, they indicate something else to divers: potential shipwrecks.

When Cassway typed the coordinates into the database, multiple hang records popped up. “That’s when we decided hey, there’s got to be something there,” Petkovic recalls.

The number of divers who explore shipwrecks in the cold, dark waters and strong currents off the Atlantic coast is small. The number who hunt “undiscovered” wrecks at extreme depths is even smaller—and more competitive.

Petkovic told only a handful of trusted friends about the suspected U-111 wreck site, and as they planned their first expedition, they devised a cover mission to prevent their actual plan from being discovered.

“What’s the most boring type of wreck we could think of?” says Petkovic. “Someone said ‘Russian freighter,’ and it stuck. Freighters are a dime a dozen. So we had the ‘Russian Freighter Expedition.’”

One morning last June, as Cassway’s 45-foot R/V Explorer steamed out of Cape May, some of those on board were still unaware of the true goal of the mission: to find the last undiscovered World War I U-boat off the U.S., and the first U.S.-crewed sub to make a solo crossing of the Atlantic.

After several hours, Explorer arrived over the suspected wreck site and an ROV was dropped overboard. ROV pilot Ross Baxter navigated the tethered undersea robot using a laptop and repurposed video game controller. It wasn’t long before a ghostly object appeared on the screen.

“Like finding a needle in a haystack,” Baxter recalls.

The crew consulted archival photographs of U-111, comparing the sub’s fore- and aft-guns, the graceful arc of its conning tower, and other distinctive features with the apparition on the video monitor. It was a perfect match.

Peering into the hatches

The team decided to return to U-111 to glean more information before summer weather gave way to more unpredictable fall conditions. The plan was to send the ROV back down to the wreck along with three technical divers.

The extreme depth would require extreme measures. Each diver would be outfitted with 300 pounds of gear and could spend no more than 20 minutes exploring the wreck before beginning a maddeningly slow, four-hour ascent to the surface. (Rise too fast and the gas inhaled under pressure at 400 feet would bubble out of the divers’ blood and result in “the bends,” injuring or killing them.)

The weather looked good for Labor Day weekend, but then came news of two rare fatalities in the wreck diving community. The spooked team agreed that only the ROV would go into the water.

RV/Explorer steamed out of Cape May on Labor Day, exactly 100 years and 5 days after U-111 was sunk. As the boat closed in on the wreck site, Cassway studied digital readouts from the console. “We’re aiming for a 20-foot-wide thing from 400 feet up,” he muttered as the anchor was set.

The crew tossed the ROV overboard and fed out hundreds of feet of tether. All eyes were locked on two video monitors as U-111’s conning tower came into view. The ROV glided along the sleek hull, its cameras peering into the sub’s open hatches. The location of the hatches and other details matched plans of the U-boat, further confirming its identity.

The team plans to send divers to U-111 next year, as well as complete a 3-D photogrammetric model of the U-boat. They’re keeping its exact location under wraps.

The National Geographic Society, committed to illuminating and protecting the wonder of our world, supported this work. Learn more about the Society’s support of Explorers working to inspire, educate, and better understand human history and cultures.

Maritime historian Aaron Hamilton notes that the U-111 marks an important moment in the technological evolution of submarines. “The fact that it’s been found and can now be documented and photographed is a is a significant achievement,” he says.

Petkovic hopes to locate descendants of Lt. Commander Daubin and his crew. “That’s one thing we’d like to do with these wrecks that we locate,” he says. “We’re always trying to bring it back to somebody, bring the history back to folks who may not know what their family member—their grandfather, their great-grandfather—did. I mean, Daubin was a hero. The story of U-111 should be a movie.”

The author of 5 books, 3 of which are New York Times bestsellers. I’ve been published in more than 100 newspapers and magazines and am a frequent commentator on NPR.