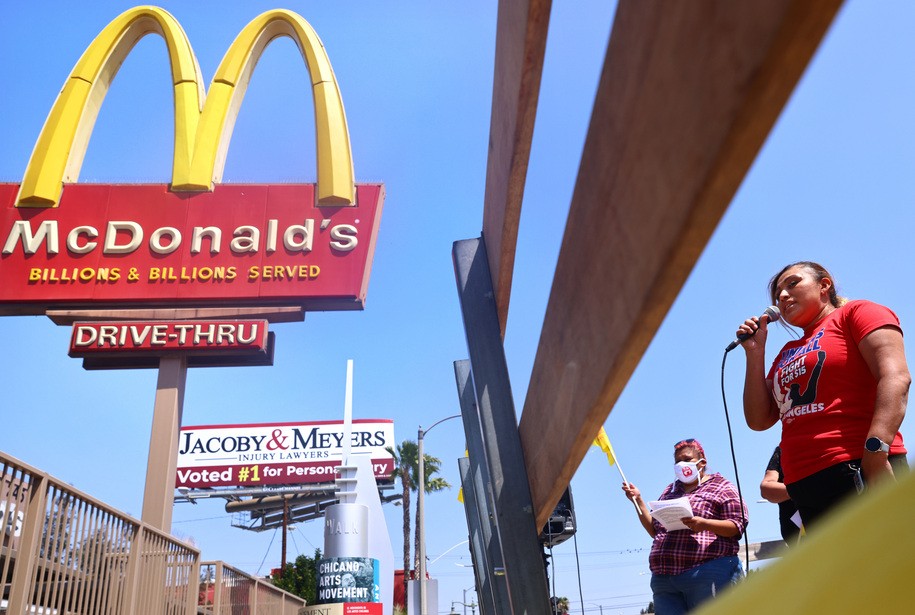 For Maria Bernal, who worked at the fast food chain, Jack in the Box for 10 years and has been working at McDonald’s for three months, the bill will mean she finally has a sense of job security and the ability to support her family. While at Jack in the Box, Bernal suffered years of wage theft, labor harassment, and sexual harassment. She was not even aware that she was entitled to a 10 and 30-minute break until she met organizers with the Service Employees International Union, supporters of the bill. As a result of the continued abuse at Jack in the Box, Bernal, who is a single mother of three children working to pay for her oldest daughter’s college, couldn’t pay her own rent. Her landlord evicted Bernal, her 12-year-old child, and her 3-year-old in the middle of winter in 2019. They lived in her car for six months.

“It was very frustrating looking at my children in the conditions that they were in,” said Bernal. “My baby was crying, he was cold, and uncomfortable in the car. And more than anything, I was scared.”

Bernal would leave her car parked outside the restaurant where she worked, risking passersby breaking into her car and stealing her belongings.

“Those were very frustrating moments, very sad moments,” Bernal said. “I felt a lot of anger because I was working so hard to have a decent place to live.”

While at Jack in the Box—which saw $1.14 billion in profits in 2021, up from $1.02 billion in 2020—Bernal worked double shifts, from 2 pm until 6 am, and was only paid for an eight-hour shift at $14 an hour. To date, Bernal’s former employers owe her more than $50,000. Every time she asked her manager for an explanation, they would say that her back pay would arrive in the next check, but it never did. Bernal was also not allowed to take days off; if she did, her boss would threaten to take her off the schedule entirely. With little pay, no health benefits, and the restaurant constantly being understaffed, Bernal said it felt like she was being squeezed dry. On a few occasions, she recalls having to run across the kitchen manning the air fryer and the hamburger station to cover for other workers who weren’t there, all without any increase in pay.

“It was not an option for me to leave my job,” Bernal said.

One day, organizers from the SEIU arrived at Bernal’s restaurant and saw Bernal in her car. They asked her questions about the conditions at her job, and she joined their effort for better worker protections.

“I was so tired, unpolished, and I felt that I had no support,” Bernal said. “[Organizing with them] was difficult at first because there was a lot of [employer] retaliation, but it was all worth it.”

Prism reached out to Jack in the Box for comment, but they did not respond.

Mary Kay Henry, the international president for the SEIU, which has nearly 2 million members and was a major backer of the FAST Recovery Act, said that this is a watershed moment in the history of the labor movement. According to Henry, they are in conversation with representatives from other states to adopt similar legislation to protect workers’ rights. In New York, under a new bill being considered by the New York City Council, New York City’s Department of Consumer and Worker Protection would be allowed to order the Health Department to “suspend, revoke, deny or refuse to renew a food service establishment permit” if a company has had to pay $500,000 or more over a three-year period for violations of the Fair Work Week Law.

While corporations—including McDonald’s, which saw record-breaking profits in 2021 and paid their CEO over $20 million—have criticized the bill, saying that it will raise prices, workers’ rights advocates and workers say the change is imperative. Bernal said she’s not surprised that there is backlash from corporations, but she hopes the bill will improve working conditions and eventually lead to health care benefits and more respect.

“[Employers] don’t even comply with giving us medical attention after being hurt on the job,” Bernal said. “Yet we continue to work. I think that would be a bigger step, that they give us medical insurance so that we have a dignified place to work. Any money that [owners] make, they are taking it for our sweat, our exhaustion, for our suffering.”

Prism is an independent and nonprofit newsroom led by journalists of color. Our in-depth and thought-provoking journalism reflects the lived experiences of people most impacted by injustice. We tell stories from the ground up to disrupt harmful narratives, and to inform movements for justice. Sign up for our newsletter to get our stories in your inbox, and follow us on Twitter, Facebook, and Instagram.