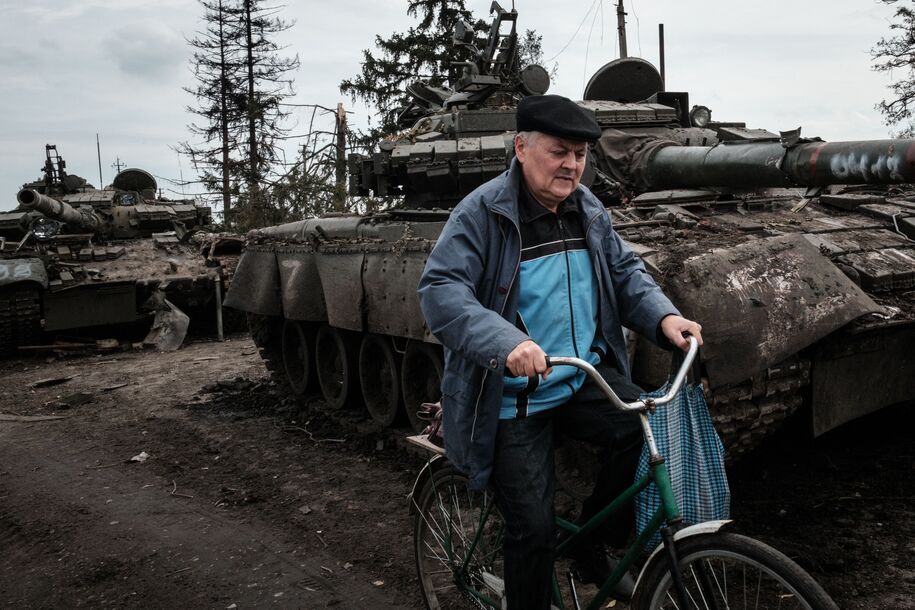 All through Friday into the evening, Russian sources on Telegram were repeating the same stories: Ukrainian forces were everywhere; Russians troops were trying to escape, but the artillery was gone; the armor was gone; the officers were gone. Ukrainian forces were coming at them in waves, and even though the Russians were bravely holding their ground and mowing the Ukrainians down with machine guns, the Ukrainians just got back up and kept coming. Because drugs. Or zombies. Or zombie drugs. In any case, the Ukrainians were unstoppable killing machines. Please send help.

At the same time, Russian fan channels were telling a very different story. Russia had reinforced Lyman. Ukrainian soldiers were dying by the thousands. Russia forces had lured Ukraine into a “killing field.” Lyman would ever remembered as a disaster for Ukraine. Lyman was a clever trap. Lyman was Russia forever.

On Saturday morning in Ukraine, this was Lyman.

This is actually the northwestern edge of Lyman, along the road that runs west into Drobysheve. Similar videos show Ukrainian forces entering Lyman at its southeastern corner and raising the blue and yellow at that edge of the city.

What’s notable in both videos is the silence. There is no sign of continued fighting. No booming artillery. Not even small arms fire. On Saturday, there are reports that Ukrainian forces have reached the center of the small city. The Ukrainian military has now officially announced the liberation of Stavky, Drobysheve, Yampil, and Kolodyazi, confirming the map as it appeared on Friday morning. There has not yet (as of 8 AM ET, 3PM in Kyiv) been any official announcement concerning the liberation of Lyman. However, that seems to be a technicality at this point.

Ukraine has taken Lyman. Any Russian forces remaining are completely surrounded and confined to an area in the north central part of the city.

There are also reports that Ukrainian forces have entered Zarichne and Torske, with Russian forces retreating from that area. Fighting reportedly continues outside of Kreminna, and there are reports of Russian forces also leaving that location in large numbers.

While some reports indicate that as many as 5,000 Russian and LPR forces remained within the shrinking “pocket” at Lyman, that seems highly unlikely.  Any Russian forces that remain likely number in the hundreds. On Saturday afternoon in Ukraine, there are continued reports of fighting in Lyman. Though why any Russian forces would be fighting at this point seems unfathomable.

It now seems possible to put together something of a picture of what happened in the last 48 hours from a mixture of sources. As the perimeter around Lyman tightened, Russian forces that had been in Yampil and Drobysheve first went into Lyman, then began withdrawing along the road to the east. There was an effort to remove heavy equipment, including the artillery that had backed the Russian position in Lyman over the last two weeks. Within hours, many of the Russian infantry began to follow, but all of this made for slow progress down relatively small roads.

Throughout Thursday and Friday, those Russian forces issued many requests for reinforcement or rescue, and were sent assurances it was on the way. There are even messages from the Bakhmut area complaining that Wagner forces left the front lines there to go to Lyman. However, if any of those forces ever made it to Lyman, it doesn’t get mentioned. Most likely, any relief force that was sent never got closer than the intersection between Torske and Zarichne, where they may have helped to temporarily hold Ukrainian forces back from the road.

As the escaping forces ran a gauntlet of Ukrainian artillery, anti-tank weapons, and heavy machine gun fire, they took significant losses. Damaged armor clogged the route. They were also slowed because the road leading into Lyman had been mined or damaged at several locations.

At some point, Russian troops (some reports suggest members of BARS-13) blew up the bridge across the Zherebets River north of Torske to prevent Ukrainian pursuit. This may have helped some escape to the east, but it also trapped the forces following them, leading to an intense fight near Zarichne as those forces attempted to find a way out.

Here is how one Russian source describes it.

The media and the government Telegram channels are beginning to casually admit there was some problem at Lyman, but they’re not making a big deal about the situation. Actually, it’s a disaster.

It seems likely that most of the Russian forces that were in Lyman didn’t either escape or remain in the city to be taken prisoner. They’re simply dead on the field somewhere to the east.

However, some of those Russian forces clearly did fight their way through, because they lived to repeat the “Ukrainian drug zombies” story after retreating all the way back to Valuyki, across the Russian border. (Russians claiming that Ukrainians had been drugged into unstoppable killing machines without fear is a story that has been told since near the start of the invasion).

Russian sources insist they did not leave behind thousands of troops in Lyman, but indicate that there may well be hundreds. If so, we’re going to know very soon. Ukrainian forces will also get a good look at just how effective Russian forces were in getting all that heavy equipment out of the city. It’s unclear how intense any fighting in Lyman is at this moment.

Meanwhile, the Russian fan channels are already back in business, explaining how Lyman is a great victory for Russia. They’ll still be making those claims when Ukraine liberates Crimea.

There are reports this morning that Russia has kidnapped Ihor Murashov, the director of the Zaporizhzhia Nuclear Plant at Enerdorhar. Reuters reports that Murashov was blindfolded and driven to an unknown location. The IAEA is predictably concerned, and was told that the director was being “detained” so that he could “answer some questions.”

Recently, Russia has indicated it wants to shut down the plant, which is the largest in Europe and accounts for a fifth of all electricity produced in Ukraine. Workers there have been told to prepare for a shutdown, after which they are to be placed under the authority of Rosatom, the Russian nuclear directive. They will then have to compete for their jobs against imported Russian workers.

To the north, along the eastern bank of the Oskil River, Ukrainian forces have reportedly liberated another Lyman — Lyman Pershyi. If these reports are accurate, this would close the gap between the bridgeheads at Dvorichna and Kupyansk.

Fighting continues at locations to the east of the bridgehead. That includes reports of fighting at Pischchane, which is several kilometers away from previous reports of Ukrainian movement and well down highway P07 that leads to Svatove.

Meanwhile, Ukrainian forces also continue to move to the south. There were reports on Friday that Ukraine has reached Kruhlyakivka, putting this southward advance only 15km north of Borova. With the liberation of Lyman, Borova remains the last large town in Kharkiv Oblast still occupied by Russian forces.

We thank the “Ministry of Defense” of 🇷🇺 for successful cooperation in organizing the “Izyum 2.0” exercise. Almost all russian troops deployed to Lyman were successfully redeployed either into body bags or into 🇺🇦 captivity. We have one question for you: Would you like a repeat? pic.twitter.com/wmPi2LJROw

And supposedly there’s video, which I’m not going to go looking for:

“its a slaughter” – Ukraine Volunteer Transcripts

Some Ukrainian soldiers are reporting that they’re actually feeling traumatised by how many dead Russian soldiers they have seen. The Russians may have been ordered not to surrender & are fleeing instead https://t.co/nrJNfKOlSO

And Ukraine isn’t letting up:

The Armed Forces of Ukraine moved to advantageous artillery positions and began a massive shelling of the cities of Rubizhne, Lysychansk, Kreminna, Sievierodonetsk

More information from inside Lyman, and once again those involved in “cleanup” indicate that there’s no sound of fighting. If there was any fighting in Lyman today, it’s been limited. It seems likely that most of those who remained in the city have so far surrendered.