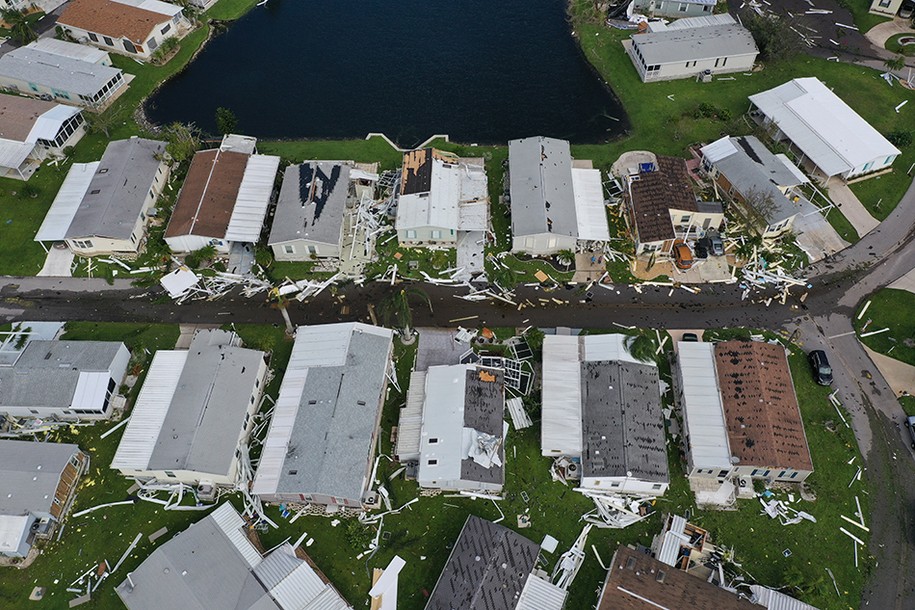 In the Ninth Ward, Johnson visited the George Washington Elementary School, on St. Claude Avenue, which was being used as a shelter. “Most of the people inside and outside of the building were Negro,” the diary reads. “At first, they did not believe that it was actually the President.” Johnson entered the crowded shelter in near-total darkness; there were only a couple of flashlights to lead the way.

“This is your President!” Johnson announced. “I’m here to help you!”

The diary describes the shelter as a “mass of human suffering,” with people calling out for help “in terribly emotional wails from voices of all ages. . . . It was a most pitiful sight of human and material destruction.” According to an article by the historian Edward F. Haas, published fifteen years ago in the Gulf Coast Historical Review, Johnson was deeply moved as people approached and asked him for food and water; one woman asked Johnson for a boat so that she could look for her two sons, who had been lost in the flood.

This is your President! I’m here to help you!

Let’s move on to other pundits.

Maggie Koreth of FiveThirtyEight writes about research showing a direct correlation between living through natural disasters and belief in climate change.

“Disasters make environmental problems more salient,” he said. Paserman’s research has found that, between 1989 and 2014, congresspeople from districts hit by a hurricane were more likely to sponsor or co-sponsor environmental regulatory bills in the following year. And he’s not the only one who has noticed similar correlations. According to another study, which looked at abnormal temperature and precipitation trends between 2004 and 2011, members of Congress whose home states were experiencing weird weather were more likely to vote for all kinds of environmental legislation. More broadly, international research from 34 countries found that nuclear disasters increased the number of renewable-energy policies implemented for as long as seven years after the event. […]

A 2021 review of existing literature discovered ample evidence that living through a natural disaster is associated with higher levels of self-reported belief that climate change is a problem and a greater concern about what this might do to you and your family. Our own polling with Ipsos earlier this month showed something similar. Even among Republicans, nearly half of those who had experienced an extreme weather event in the past five years told us they were worried about climate change, compared with only 17 percent who hadn’t experienced a natural disaster.

But there are limits to the ability of a disaster to prevent future calamities. For one thing, the same review paper that showed increased belief in climate change didn’t find a corresponding increase in behaviors that would deal with that issue. And changes in belief are still heavily moderated by what people already think. For example, in a 2019 survey of people who experienced severe flooding in the United Kingdom during the winter of 2013-14, the ones who walked away with the highest levels of concern about climate change were those who had already attributed floods to global warming.

Paul Krugman of The New York Times theorizes that remote work due to the COVID-19 pandemic may have led to increases in both home prices and rents.

At first glance, the pandemic housing price surge may seem reminiscent of the 2000s bubble. But this time really is different, in a couple of ways.

What happened from 2000 to 2006 looked, even at the time, like pure speculative fever rather than a response to a real surge in housing demand. How could you tell? By the fact that the surge in home prices wasn’t matched by a surge in rents…

This time, however, rents have soared along with home prices. Official data, which measures how much renters are paying, on average, has lagged the rental rates on new leases, which are a better indicator of demand. Rental data is, however, available from a number of private sources like Realtor.com, Apartment List and Zillow. This data suggests that market rents have gone up around 25 percent since the beginning of the pandemic — not quite as much as home prices but still a lot (although they seem to be plateauing)…[…]
So what happened? Like many people, I’ve speculated that the pandemic-induced rise in remote work led to a demand for more space at home. New research from economists at the San Francisco Fed supports this view. They found that remote work expanded most in locations where it was already relatively common and that home prices rose the most in these locations. (“Migration controls” refers to the Fed’s attempt to measure this relationship with and without the separate, though not unrelated, movement of workers from place to place.)

Forrest Wilder of Texas Monthly reviews and grades out the Texas gubernatorial between Greg Abbott and Beto O’Rourke.

Debates are generally treated by political professionals and the media as important events in the democratic process. And yet, in the past twelve years—over four gubernatorial races—three of the four gubernatorial debates occurred on a Friday night during football season in Texas. (In 2010, Rick Perry refused to debate altogether.) This suggests that the candidates—at least some of them—do not want them to matter. Scheduling a single, hour-long, audience-less debate during Friday night lights is not a scenario that invites broad public attention; it’s a perfunctory nod to the idea that informed citizens deserve to see candidates directly engage each other. And yet the ritual requires that a winner and loser be declared. How else to prove that the debate matters than to crown a champion?

So who won, Abbott or O’Rourke? If I must give an answer, it is this: let’s call it a draw . . . which gives Abbott the edge because of how much ground O’Rourke needs to make up in order to be the first Democrat to win a statewide race since some of y’all were in diapers. Tonight’s mano a mano, at least by Texas gubernatorial standards, featured two veteran campaigners well versed in their positions and confident in their antagonisms. It was not the sad spectacle of 2018, when Greg Abbott had nothing to fear from the hapless Lupe Valdez, the former Dallas County sheriff, and yawned his way through the debate and toward a thirteen-point victory.

A Friday night during football season? In Texas?

Stunned reactions keep coming in with respect to Ukraine reclaiming Lyman. Andrey Gurulyov, former deputy commander of Russia’s southern military district, said he couldn’t explain the defeat. He blamed in on a system of lies, “top to bottom” and was suddenly disconnected. pic.twitter.com/O4aoRqVx96

But a more sensitive and politically charged goal was left largely unstated: burnishing Harris’s role on the potent issue of women’s rights, a sensitive mission in two male-dominated countries that lag starkly behind other developed nations on gender equity.

It was a balancing act for Harris. Japan and South Korea are strong allies that the United States considers pivotal to countering China’s growing aggressiveness, and she came to strengthen ties with the two countries, not alienate the men who lead them. But at seemingly every turn, the vice president sought to highlight the chasm that exists between genders here and provide living proof that a more equitable path exists.

“I do strongly believe that when women succeed, all of society succeeds,” she said at a roundtable featuring South Korean women on Thursday. “I also believe the real measure of the state of a democracy is measured by the strength and standing of women. … If we want to strengthen democracy, we must pay attention to gender equity and put in the hard work of lifting up the status of women in every way.”

On the surface, things seem calm. An outsider walking through the streets would not get the impression that a presidential election is about to be held. Looking out the window, I notice that the Brazilian flags — which have come to represent support for Mr. Bolsonaro — have been removed from the neighboring facades. An ambiguous sign: It could be a pre-emptive response to defeat, or the calm before the storm. There’s not even much talk among friends and family concerning the election; the lines were drawn in 2018 and have not moved much since then.

Yet for all the social polarization, there is still enormous support for democracy here: 75 percent of citizens think it is better than any other form of government. Right from the beginning, Mr. da Silva has been trying to exploit that common feeling and open up a broad front against Mr. Bolsonaro. He picked a former adversary from the center-right, Geraldo Alckmin, as his running mate; assiduously courted business leaders; and secured endorsements from prominent centrists. In this comradely atmosphere, supporters of the center-left candidate, Ciro Gomes, currently about 6 percent in polls, may even throw their votes behind the former president. If that happens, Mr. Bolsonaro will surely be beaten.

That glorious prospect does little to dispel the anxiety enveloping the country. It’s physically impossible not to dwell on what might happen. The possibilities are terrifying: The polls might be wrong, and Mr. Bolsonaro could win. The polls might be right, and Mr. Bolsonaro could refuse to concede defeat, and even initiate a coup. Each day now seems to be the length of a day on Venus — around 5,832 hours — to go by the agitation of my Twitter feed.

Interestingly, many of the comments within the Twitter comment thread have remarked that Rosa Parks handwriting looks similar to their own grandmothers.

Finally today, The Grammarian writes for The Philadelphia Inquirer about the one word that may have doomed Pennsylvania’s proposed anti-abortion constitutional amendment.

Over the summer the Pennsylvania legislature passed language that, if passed in a second session, and then approved by voters as a ballot question, would add the following line to the state constitution: “This constitution does not grant the right to taxpayer-funded abortion or any other right relating to abortion.” Because it’s a constitutional amendment and not a regular bill, Gov. Tom Wolf — who is avowedly pro-choice — can’t veto it. The process leapfrogs him.

Whether due to low information or just apathy, Pennsylvanians tend to overwhelmingly approve ballot questions. Among the 49 proposed amendments that voters have considered since 1968, they’ve approved 43 of them. So state Republicans, who have commanding control of both the state House and Senate, figured this was an easier path toward banning abortion in Pennsylvania than through the regular legislative process, which would be subject to the governor’s veto. Last week Wolf filed a lawsuit against this and other constitutional amendments in Commonwealth Court, but it remains to be seen how that will play out. For the moment, the legislature knows it has the upper hand.

What the legislature doesn’t know, apparently, is how to write.

According to Bruce Ledewitz, a law professor at Duquesne University, the drafters’ inclusion of the (frankly unnecessary) phrase “any other right relating to abortion” might prevent a court from finding personhood in the unborn — something that forced-birthers have been trying to do in state after state for decades.

Have a good day, everyone.